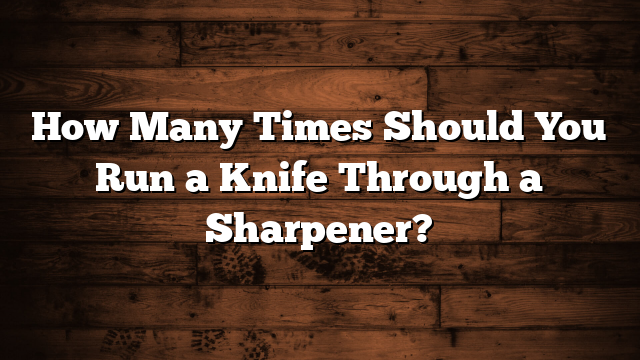 A knife is only as sharp as its edge and that edge will eventually dull with use. How often you need to run your knife through a sharpener depends on how frequently you use it and what you use it for. A chef who uses their knife all day, every day will need to sharpen more often than someone who only cooks a few times a week.

How many times should you run a knife through a sharpener? This is a question that we get asked a lot, and it really depends on the type of sharpener that you are using. If you are using a manual sharpener, then you will need to run the knife through 10-15 times to get a good edge.

If you are using an electric sharpener, then you will only need to run the knife through 2-3 times.

Can You Sharpen a Knife Too Much?

It is possible to sharpen a knife too much. If you sharpen your knife too often or with too high of an angle, you can create a “wire edge” that is sharp but very fragile. This wire edge is more likely to chip and break off, leaving you with a duller blade.

It is best to avoid excessive sharpening and use a moderate angle when sharpening your knives.

How Many Strokes Should It Take to Sharpen a Knife?

It really depends on the type of knife you’re sharpening and your own personal preferences. For a standard chef’s knife, most people generally take about 10-15 strokes on each side of the blade to get it nice and sharp. If you’re using a honing rod or steel, you’ll want to do about 5-10 strokes on each side.

And if you’re using a whetstone, anywhere from 20-40 strokes on each side should do the trick.

Should I Sharpen My Knife Every Time I Use It?

It’s generally a good idea to sharpen your knife every time you use it. This will help keep the blade in good condition and prevent it from becoming dull. There are a few exceptions to this rule, however.

If you’re using your knife for delicate tasks like slicing fruits or vegetables, sharpening it every time may damage the produce. In these cases, it’s best to only sharpen when necessary.

No, knife sharpeners do not ruin knives. In fact, they can help to prolong the life of your knives by keeping them sharp and ready to use. However, it is important to use the right type of knife sharpener for your knives in order to avoid damaging them.

For example, electric knife sharpeners are not recommended for use on ceramic or serrated blades as this can damage the blade.

How to Use a Knife Sharpener Rod

If you’re like most people, you probably don’t give much thought to your knives until they become dull. Then, all of a sudden, you can’t seem to do anything without a sharp blade. Whether you’re slicing vegetables for dinner or opening a box, a dull knife just won’t cut it.

Then, run the blade down the length of the rod several times, using moderate pressure. You’ll need to experiment to find the right number of strokes and amount of pressure that works best for your knives. With regular use, a knife sharpener rod will keep your blades nice and sharp.

It’s an easy way to extend the life of your knives and make meal prep less frustrating.

How Often Should You Sharpen Your Pocket Knife

A pocket knife is a handy tool to have with you when you are out camping, hiking, or even just doing everyday tasks around the house. But how often should you sharpen your pocket knife? The answer to that question depends on how often you use your knife and what type of activities you use it for.

If you are using your knife regularly for slicing and chopping then you will need to sharpen it more often than if you only use it occasionally for opening boxes or cutting string. As a general rule of thumb, we recommend sharpening your pocket knife every few months if you use it regularly. If you don’t use it very often, then once per year should be sufficient.

There are a few different ways that you can sharpen your pocketknife. You can use a honing rod, which is a long metal rod with a coarse grit on one side and a fine grit on the other. You simply run your blade along the rod in both directions until it is sharpened.

Another option is to use a sharpening stone. This is a flat stone that usually has two different grits on each side – coarse and fine. To sharpen your blade with a sharpening stone, first dampen the stone with water (this helps to keep the dust down).

Then, hold your knife at a 20-degree angle and stroke the blade across the stone in both directions until it is sharpened. If neither of these methods sounds like something you want to tackle, then there are plenty of good quality Sharpie knives available that come with their own built-in sharpener – making things nice and easy!

How to Use a Knife Sharpener Stick

Just follow these steps: 1. Wet the sharpener stick with water (this will help to create a slurry and prevent the diamond particles from clogging up). 2. Hold the knife at a 20 degree angle to the sharpener stick and use light pressure to draw the blade along the length of the stick, from heel to tip.

Repeat this motion 5-10 times on each side of the blade. 3. Rinse off your knife and check it out – it should be nice and sharp!

A lot of people ask how often they should run their knife through a sharpener. The answer is not as simple as it seems. It depends on the type of knife, the type of sharpener, and how often you use your knife.