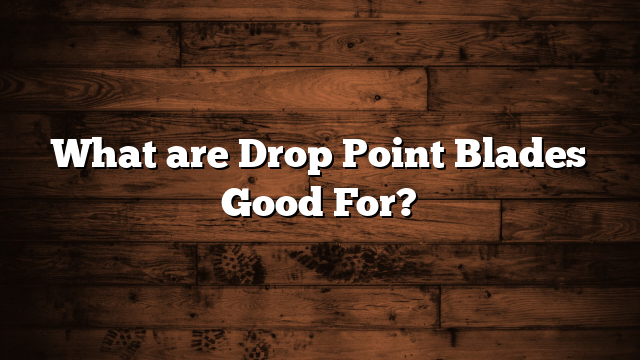 A drop point blade is a type of knife characterized by a convex curve on the spine of the blade near the tip. This design is created to reinforce the tip and make it stronger, as well as to give the user more control over the knife. Drop point blades are popular for hunting and general outdoor use because they are versatile and can be used for a variety of tasks.

Whether you’re a hunter, camper, or just looking for a versatile everyday carry knife, a drop point blade is a great option.

There are a lot of different factors that go into whether or not a drop point blade is good for stabbing. One of the most important is the angle of the blade. A steeper angle, like what you find on many tactical knives, is going to be better for stabbing than a shallower angle.

The second factor is the point itself. A sharp, fine point is going to penetrate more easily than a duller, blunter one. Another thing to consider is the construction of the knife.

A full-tang knife, where the blade extends all the way through the handle, is going to be stronger and more durable than a knife with just a partial tang or no tang at all. This means that it will be less likely to break if you have to put some extra force behind your stab. Finally, you need to think about what you’re actually going to be using your knife for.

If you’re looking for a general-purpose EDC (every day carry) knife, then a drop point is probably going to be just fine. But if you’re looking for something specifically designed for self-defense or tactical applications, then there are other options out there that might better suit your needs.

There are a lot of different opinions out there about what kind of knife is best for self-defense. It really depends on the individual and their own personal preferences. Some people swear by drop point knives, while others prefer other styles.

Here, we’ll take a look at some of the pros and cons of drop point knives to help you decide if they’re right for you. Pros: – Drop point knives have a very strong tip that can be used for stabbing or piercing.

This makes them ideal for self-defense situations where you need to make quick work of an attacker. – The broad blade of a drop point knife also makes it good for slashing or cutting, giving you more options in a self-defense situation. – Drop point knives are generally easy to control and maneuver, making them less likely to cause accidental injury to yourself or others during a scuffle.

Cons: – Because the tip is so strong, drop point knives can be more prone to breaking if used on hard objects like bone or concrete. This means they might not be the best option if you need to use your knife as a tool as well as a weapon.

– The broad blade can also make it difficult to get a precision cut, which could be important if you need to defend yourself against an attacker with a smaller weapon like a knife or screwdriver.

Which is Better Drop Point Or Tanto?

There are a lot of different factors to consider when choosing between a drop point and tanto blade. Here are some things to keep in mind: 1. What is your main purpose for the knife?

If you’re just looking for a general purpose knife, either blade style will work well. However, if you have a specific use in mind (like self-defense), then one style may be better suited than the other. 2. What is your preferred grip?

Some people find that they prefer a certain grip when using a knife, and this can impact which blade style is best for them. For example, those who like to hold their knives with an ice pick grip may prefer a tanto blade because it’s easier to control. 3. What kind of edge do you want?

Drop point blades tend to have a stronger tip, making them good for piercing or stabbing tasks. Tanto blades, on the other hand, have a more angled edge which is better suited for slicing or chopping motions. 4. How important is versatility?

If you want a knife that can do it all, then drop point is probably the way to go. However, if you’re looking for a blade that excels at one particular task, then tanto might be the better choice. 5. How do you feel about serrations?

This is mostly personal preference, but it’s something to consider when choosing between these two blade styles. Drop point blades typically don’t have serrations whereas tanto blades often do – so if you’re not fond of serrated edges, drop point might be the way to go.

What is the Difference between a Drop Point And Clip Point Blade?

A knife is only as good as its blade, and the type of blade you choose will depend on what you plan to use it for. Two of the most popular blade shapes are the drop point and clip point. Here’s a look at the key differences between these two blade types:

The drop point is the more versatile of the two, thanks to its thicker spine and stronger tip. This make it ideal for both everyday tasks and more heavy-duty jobs. It’s also easier to control when slicing or chopping, making it a good choice for beginners.

The clip point, on the other hand, is designed for precision work. Its thinner profile and sharpened edge make it great for detailed tasks like carving or filleting. It’s also easier to open packages with a clip point blade.

However, this same sharpness can also make the clip point more difficult to control than a drop point Blade. So, which one should you choose? If you’re looking for an all-purpose knife that can handle just about anything, go with a drop point.

If you need a knife for more delicate work, or if you’re already comfortable with handling a sharper blade, then go with a clip point.

When it comes to choosing a blade for your EDC (every day carry), you may be wondering what the difference is between a drop point and tanto blade. Both are great choices for an EDC knife, but there are some key differences that you should be aware of before making your decision. A drop point Blade has a convex curve on the back of the blade, which gives it more strength and durability.

The tip of the drop point blade is also thicker than the rest of the blade, making it less likely to snap off if you’re using it for tough tasks. A tanto Blade, on the other hand, has a straight edge with a very sharp point. This makes it ideal for piercing and slicing tasks.

However, because the tip is so thin, it’s more susceptible to breaking if you use it for heavy-duty tasks like prying or batoning. So, which one should you choose? It really depends on what you plan to use your EDC knife for.

If you need a versatile blade that can handle a variety of tasks, then a drop point is probably your best bet. But if you need a sharp knife that’s specifically designed for piercing and slicing, then go with a tanto blade.

There are a lot of different types of knife blades out there, and each has its own specific purpose. In this blog post, we’re going to go over some of the most popular blade types and their uses, so that you can make an informed decision when choosing a knife for your next project. The first type of blade we’ll discuss is the drop point blade.

Drop point blades are characterized by a convex curve near the tip of the blade, which gives them extra strength and durability in that area. These blades are great for general-purpose use, as they’re tough enough to handle just about anything you throw at them. Next up is the clip point blade.

Clip point blades have a concave curve near the tip of the blade, which makes them excellent for slicing and piercing tasks. These blades are also very popular among hunters, as they can be used to efficiently field dress game animals. The third type of blade we’ll discuss is the spear point blade.

Spear point blades have a symmetrical double-edged design, which makes them ideal for thrusting and stabbing tasks. These blades are also popular among military and law enforcement personnel, as they can be used for self-defense in close quarters situations. Finally, we have the trailing point blade.

Trailing point blades have a convex curve near the tip of the blade, which gives them extra length for slicing tasks.

The clip point blade is a versatile and popular blade shape that has a wide variety of uses. It can be used for everything from EDC tasks to self-defense to tactical applications. Here are some of the most common uses for the clip point blade:

EDC: The clip point blade is an excellent choice for everyday carry. It’s versatile and can be used for a variety of tasks, from opening boxes to slicing through rope. Self-Defense: The sharp, needle-like tip of the clip point blade makes it ideal for self-defense situations.

It’s also easy to control, so you can avoid harming yourself or others if you need to use it in a defensive situation. Tactical Applications: The clip point blade is often used by military and law enforcement personnel for its versatility and durability. It can be used for everything from cutting through barriers to performing search and rescue operations.

Drop point blades are good for a variety of tasks, including skinning and gutting game, slicing meat, and even self-defense. The main advantage of a drop point blade is its versatility; it can be used for a wide range of tasks without being too specialized for any one thing. Additionally, the drop point design makes the blade stronger and less likely to break than other designs.