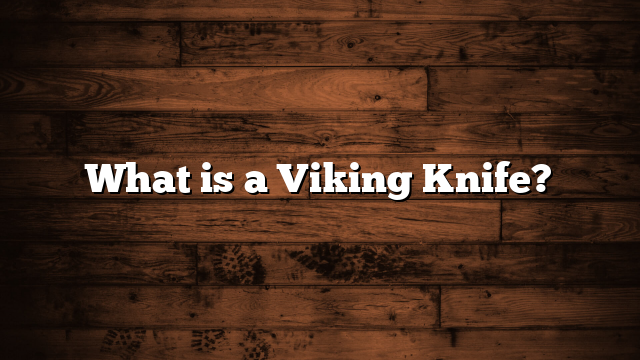 A Viking knife is a type of knife that was used by the Vikings. It is a single-edged knife with a curved blade and a blunt tip. The blade is usually about 9 to 12 inches long and 1 to 2 inches wide.

The handle is often made of wood or bone, and it has a metal guard at the base of the blade to protect your hand from slipping.

A Viking knife is a type of knife that was used by the Vikings. It is a single-edged knife with a curved blade and a pointed tip. The blade is usually about 9 to 12 inches long and 1 to 2 inches wide.

The handle is usually made of wood or bone, and it has a metal pommel at the end. The Viking Age began in 793 AD when the first Viking raid happened in Lindisfarne, England. After that, the Vikings became known for their raids and conquests all over Europe.

They were also known for their skill in blacksmithing and metalworking. This is how they made their famous swords, axes, and knives. The Viking knife was used for many purposes, such as eating, cooking, carving wood, and fighting.

It was also used as a tool for everyday tasks like opening crates or cutting rope. Today, you can still find replica Viking knives being made by modern blacksmiths and sold online or in stores. These knives make great gifts for history buffs or anyone who loves Norse mythology.

What is Viking Knives?

Viking knives are a type of knife that was popularized by the Vikings. They were known for their strength and durability, as well as their sharpness. Viking knives were typically made from iron or steel, and had a double-edged blade.

The handle was often decorated with carvings or inlays, and the knife itself could be used for both utility and warfare purposes.

What are Viking Knife Made Of?

Viking knives were made from a variety of materials, including iron, steel, and bronze. The most common material was iron, as it was readily available and could be easily worked. Steel was also used for making knives, but it was more expensive and not as easy to work with.

Bronze was sometimes used for making knives, but it was not as strong as iron or steel.

What is a Viking Dagger Called?

The Viking dagger was a common weapon used by the Norsemen during the Viking Age. It was typically a single-edged knife with a sharp point, and was used for both thrusting and slashing. The daggers were often decorated with intricate designs, and some had hilts made of bone or antler.

Viking knives were made by a variety of people, including blacksmiths, metalworkers, and even farmers. The most famous Viking knife-maker was Ulfberht, who is thought to have created the first all-metal knife.

A Viking seax knife is a type of single-edged knife which was popular among the Germanic people during the Migration period and the Early Middle Ages. It was used both as a tool and as a weapon. The blade was usually between 20 and 60 cm (8 and 24 inches) long, with an average length of 30 cm (12 inches).

The blade was often decorated with inlays or engravings. The hilt of the knife was typically made from wood, bone, or antler, and it could be either straight or curved. The grip was often wrapped in cord or leather for comfort.

A seax knife could have either one or two Fullers (grooves), which helped to lighten the blade and make it stronger. Some blades also had a false edge near the tip, which could be used for stabbing. Viking seax knives were used for a variety of tasks, including hunting, carving wood or bone, preparing food, and fighting.

In battle, they were used as both thrusting and slashing weapons. Seaxes were especially effective against lightly armoured opponents such as cavalry riders since they could penetrate their mail shirts easily. The popularity of seax knives began to decline in the 11th century as swords became more common on the battlefields of Europe.

However, they continued to be made and used in smaller numbers throughout the Middle Ages and into modern times.

A knife is a tool with a cutting edge or blade, hand-held or otherwise, with most having a handle. Some types of knives are used as utensils, including knives used at the dining table (e.g., butter knives and steak knives) and knives used in the kitchen (e.g., paring knife, bread knife, cleaver). Other types of knives are designed for specific tasks such as pruning plants or carving wood.

Knives are also used as weapons. The word “knife” derives from the Old Norse knifr for blade. Knife-like tools were made from flint during the Stone Age.[1]

In ancient times bronze was considered more valuable than iron because it was rarer and could be worked like gold and silver into intricate shapes. Iron became more common after 1200 BC with the advent of smelting technology.[6][7]

Daggers were usually part of a larger weapon, such as a sword or spear. They were also worn as personal weapons by soldiers and bodyguards. The double-edged dagger known as the stiletto was popular among civilians during medieval times for self-defense purposes; however, due to its small size it did not have the same military applications as larger daggers.

[8][9] Knives have been used as implements since prehistoric times and play an important role in many cultures around the world. In some cultures they are solely utilitarian while in others they possess great symbolic value and are often decorated with elaborate engravings or carvings (see: scrimshaw).

Today there is a wide variety of different designs available catering to many different tastes but all share one common purpose – to help make our lives just that little bit easier!

The Viking knife is a modern take on the traditional Scandinavian knife. The blade is made of high carbon steel and is razor sharp. The handle is made of wood, antler or bone, and is very comfortable to hold.

The sheath is also made of wood and has a leather strap for attaching to your belt. This knife is perfect for hunting, fishing, or everyday use. It is truly a versatile tool that any outdoorsman would be proud to own.

The Viking knife is a small, lightweight utility knife that was popular among the Vikings. It was used for everything from cutting meat and cheese to preparing food and cleaning fish. The knife was also used as a weapon, and many of the knives found in Viking graves were actually battle-scarred.